Some scans from the upcoming set Next Destinies have been leaked/released onto the internet, so I added them to the database. (Thanks to PidgiPress for the tip-off!)

The set is due to release on February 8, 2012, so you’ve got a bit of waiting to do before you can get your hands on those shiny Mewtwo EXs. 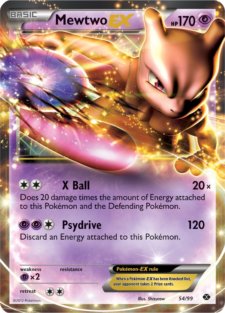 Pokémon™ Trading Card Game players everywhere, get prepared for the return of Pokémon-EX cards in the fourth expansion of the Black & White series: Pokémon TCG:Black & White—Next Destinies! Using advanced powers and new strategies, Trainers will battle like never before with awesomely powerful Pokémon, including two versions of six different Pokémon-EX!

Pokémon-EX are more powerful versions of Pokémon, giving Trainers great rewards when used effectively. But beware: Trainers also suffer heavier losses when those Pokémon are defeated! In Black & White—Next Destinies, players will find more than 100 Pokémon, including some—like Mewtwo-EX— from beyond the Unova region for the first time in this expansion! Discover elusive Pokémon like Reshiram-EX and Zekrom-EX. Black & White—Next Destinies delivers your destiny: Pokémon with exceptional HP, Special Energy and Trainer cards with expanded powers, and new strategies to extend your victory streaks!

Each new theme deck and booster pack includes an in-pack code card that unlocks virtual cards for play in the Pokémon Trading Card Game Online. Expand your personal deck and battle against others from anywhere in the world at any time from your own computer! Battles are taking place now at www.pokemon.com/tcgo!

The etching treatment sounds kinda cool. And we know there will be some secret cards since the scans say out of 99 on them.

As always feel free to rate and discuss the cards. This is the first set we’ve had (partially) up on the site before it was released, which is pretty cool.